At the monument on the junction of Highway 29 and the haul road, National Miners’ Union Presidents and officials paid tribute to the 26 men and one woman who lost their lives in the worst coal mine fire disaster in Utah history on Dec. 19, 1984.

Mike Dalpiaz, International Vice President of the United Mine Workers of American district #22, welcomed the crowd of family members, fellow workers and 26 union officials from the western states. He introduced Levi Allen, International Secretary Treasurer of the United Mine Workers of America, and Jaceson Maughan, chairman of the Utah Industrial Commission, as speakers for the memorial.

Dalpiaz also explained that there would be two ceremonies included in the program: the lantern and evergreen. During the lantern ceremony, Union officials, family members or fellow workers carried a lantern to the front of the monument bearing the name of the lost miners one at time while Dalpiaz read the name of the miner and the representative carrying the lantern.

As Allen began speaking, he asked everyone to take two deep breaths, explaining that he believed that nothing binds us like our breath. He explained that we all breath the same air and that we should never waste a single breath in forgetting these 27 courageous miners. Allen continued, stating that the disaster did not need to happen and we need to make sure that it never happens again. He asked everyone to live every day to remember these 27 miners. “They are our heroes and we should never forget them,” he pleaded. He then requested that the audience all sing the first verse of “Amazing Grace” in remembrance of the miners.

As Maughan was introduced, it as remarked that he works with the state legislature to demand worker rights for all. Maughan recalled the time of year that this disaster happened and that it changed the lives of 27 families. He reminded all of the sacrifice made by many to try to rescue the miners and the crippling sorrow that overcame the community as the outcome was announced. Maughan said that he will work to enhance coal mine safety so that it never happens again. He expressed his abiding love for everyone that goes inside the mines and takes his responsibility very serious.

Following the addresses of the speakers, Dalpiaz read the ceremonial words of the sacred evergreen ceremony used at occasions such as this. Everyone present placed an evergreen bough at the center of the monument between the lanterns. This ceremony was followed by a prayer. As memorial guests, left they were given a gift to be placed in their homes so that they would never forget the 27 miners who lost their lives in the Wilberg Mine Disaster. 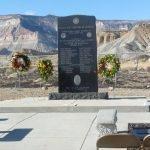 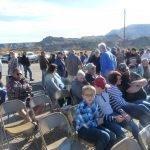 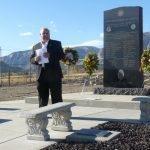 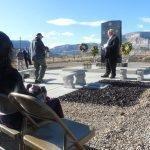 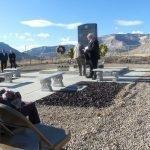 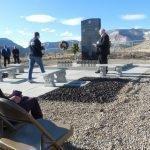 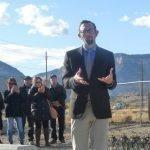 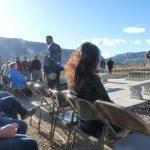 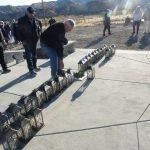 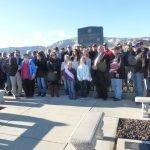