Brad Richman speaks to Emery County Commissions regarding his application for the National Wild Horse and Burrow Association.

Player then spoke of a video on YouTube, “Horse Rich and Dirt Poor,” produced by the Wildlife Society that states that wild horses and burros should be managed. This discussion led to the introduction of Brad Richman, who is seeking an appointment on the National Wild Horse and Burrow Association. He spoke about his desire to serve on the board and his feelings about the mismanagement of the situation, which has caused overpopulation as well as wiped out ranges and water supply in Utah and most of the West. Chairman Player read a letter of endorsement for Richman to accompany the other letters he has procured.

Emery County Commissioner Lynn Sitterud reported that as a commission, they have met with the Bureau of Land Management (BLM) requesting that a study be done of the decrease of grazing AUM’s and increase of wild horses and burros over the past 20 years.

Next, Ray Peterson read a Congressional Record of Happenings document with Public Lands Recognition regarding the S47 bill signed by President Trump on March 27. He presented a copy of the document and picture of Pres. Trump signing the legislation to the commissioners and members of the public lands council.

Commissioner Kent Wilson said that the commissioners are going to converse with Representative John Curtis’ office on Wednesday regarding the selection of the advisory board required by the recent land bill. They are recommending two names in each of the areas for consideration by the Secretary of the Interior.

Don Stephens, BLM field manager, stated that they are emphasizing two aspects of importance in their office right now: map corrections and scheduling action items required by the bill. Peterson reported that there are discrepancies on boundaries that need to be corrected. Stephens further remarked that they have received applications from a number of companies for drilling helium wells east of Goblin Valley. The BLM is also planning to plug 12 abandoned wells in the Grassy Trail Oil Field and also reclaim the property around the wells.Lastly, Stephens reported that volunteers and the BLM recently installed 27 directional signs on the desert.

Mark Stilson, Utah State Water Engineer, reported that North Emery Water Users have applied for a stream alteration permit in Rilda Canyon. Stilson also reported that the passage of the secondary water for residents legislation means that starting next year, every new secondary hook-up must be metered. By the year 2039, all connections must be metered.

Justin Hart, Aquatic Manager for the Division of Wildlife Resources (DWR), announced that gill netting at Joe’s Valley is scheduled for May 14 at 9 a.m. and also for Scofield later in May. The fishing is good at Joe’s Valley following the planting of tiger muskies, which have cut down the number of chubs in the reservoir, Hart reported. The DWR will be planting rainbow trout and have just finished extending the boat ramp at the reservoir. The division also has plans to increase the size of the parking lot. The limit of a catch at Millsite has been put back to the original limit size of four. The fires in Huntington Canyon were devastating to the fish, Hart said, so they are working on stream restoration with the Forest Service.

The Utah Department of Oil, Gas and Mining reports that the reclamation of the Deer Creek Mine is nearing completion. The Rilda project is being completed by several agencies working together to complete the spring boxes. The contaminated springs have been disconnected and the water resources are being protected. They will also work to extinguish the fires on the coal refuse piles.

Bryan Torgersen, School and Institutional Trust Lands Administration (SITLA), praised a record-breaking $82 million distribution. He reported an application to put another cell tower by Eagle Canyon, but it was on a traded section of ground. Torgersen also shared that a solar company has applied for a permit to put a 250-megawatt solar farm on Cedar Mountain, which could bring 15 to 20 million in tax dollars to Emery County. He also reported an auction of 40 SITLA acres in Emery County next November.

Lastly, Forest Service ranger Daren Olsen told about the canyons timber projects. It will be fall before Black Canyon will be opened for bids, meaning it could be next year before the logging begins and maybe a couple of years for Reeder Canyon. He reported that because there is still plenty of snow, the gates usually closing at this time of year are still open. 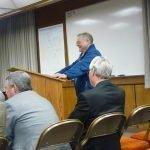 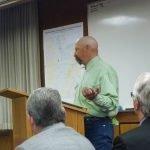