At approximately 2 p.m. yesterday, part of the roof of the Ferron Fire Department lifted off due to high winds in the area. At that time, the west side of the roof had detached from the building.

Ferron resident Vicki Anderson called 911 to report part of the roof coming off while her husband tried to see what could be done.

“We are right behind the fire house on Main Street,” Vicki explained. “It is a metal roof and it just folded when it went off. All of the tar from the roof was going into people’s yards and making a big mess.”

Vicki stated that sheriff’s deputies as well as members of the fire department and city officials arrived shortly after her 911 call to assess the damage.

Later that afternoon, the east side of the roof also detached.

“The wind blew off the east and west side, the west side a little before 1 p.m. and the east side a couple hours later. It took off the whole tin roof,” explained Ferron City Mayor Trent Jackson. “We contacted the insurance company this morning to see what can be done.”

No neighboring houses were damaged due to the incident. However, the debris from the roof has not been cleaned up completely at this time. Mayor Jackson said that after the insurance company responds to the incident, further action will be taken to clean up debris and replace the roof. 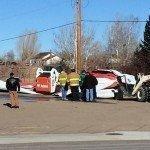