In celebration of some of the finest students Carbon High School has to offer, the school’s National Honor Society (NHS) chapter hosted its annual induction ceremony on Monday, Jan. 25. Previous members were recognized during the procession and new inductees were officially made part of the chapter in front of their friends and family.

Kicking off the procession of the ceremony, Donn Jeffs, the chapter advisor, welcomed all those in attendance. Then, the chapter’s officers were honored and each member of the presidency gave a speech explaining the four pillars of the National Honor Society: Scholarship, Service, Leadership and Character.

Following the speeches, Shalyce Rauhala, a sophomore and new inductee, performed a musical number. Last, but certainly not least, new members of the chapter were named, led across the stage and given a certificate denoting their membership. In addition, each new member signed their name amongst the signatures of every Carbon High National Honor Society member that has come before them.

“We inducted around 80 members this year. That’s awesome!” said Katie Jones, president of this year’s Carbon High National Honor Society. “I am so proud to be the president and serve with so many smart and hardworking Carbon Dinos.”

The road to such an accomplishment, however, has not been smooth. With a worldwide pandemic interfering with every aspect of these students’ lives, the requirements for being a member of the NHS have been difficult to meet. A GPA average of a 3.5 or more, high citizenship marks and several hours of community service are staples of the excellence National Honor Society members must possess. But, true to such excellence, the students honored at the ceremony persevered and met these requirements. The induction ceremony has become even more of a necessity in order to recognize and celebrate these students’ hard work and dedication. 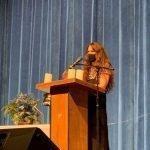 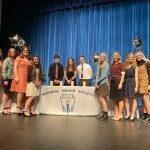 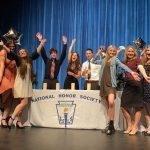 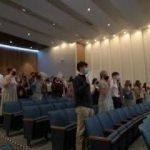 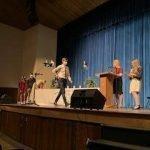