At approximately 10:30 a.m. Monday morning, public safety dispatch received a call from a driver reporting a rollover accident approximately 300 feet from the SR 155 and Highway 10 junction in Emery County.

Utah Highway Patrol Sergeant Joe Vasquez was the first responder on the scene. Vasquez reported that a 70-year-old woman was driving her 1996 Chevy Lumina west on SR 155 when she veered to the right, over-corrected to the left and back to the right. This caused the Lumina to roll off the south side of the road. The car came to a stop on the passenger side.

When Vasquez arrived at the scene, he found that the woman was trapped in the vehicle and needed assistance getting out. Lamar Guymon, who was also at the scene, helped her out.

The posted speed limit on SR 155 is 55 miles per hour. Vasquez estimated that the driver was going approximately 50 miles per hour at the time of the accident. She was wearing her seat belt, which kept her from receiving any injuries.

Sergeant Vasquez followed behind the woman as she drove 20 miles per hour back home, which was about two miles down the road. 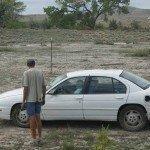 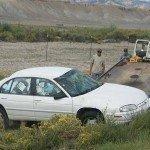 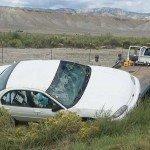 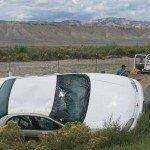 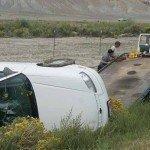 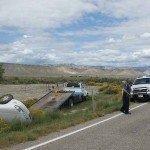