Eight-year-old Easton Grundy celebrated his birthday over the summer.

On the evening of August 5, Grundy had a special idea that involved his birthday balloons. Instead of waiting for them to deflate slowly or disposing of them, Grundy attached a note with contact information to his balloons and released them in the hope that they would be found and the discovery would result in a correspondence.

A couple of weeks passed and the family had all but forgotten about the letter. Nearly a month later, Grundy received a special piece of mail. A student at the University of Utah by the name of Michael and his brother, Daniel, were hiking near Bell Canyon Reservoir, near Sandy, when they discovered the balloons.

According to the brothers, the balloons had traveled over 100 miles and climbed just over 7,000 feet. Coincidentally, the balloons landed only a few feet from the trail that the brothers were on just before they were gearing up to leave. Michael not only wrote Grundy a letter, but also sent him photos of the area where they were camping. Short notes and descriptions were on the back of each photo.

The family has been in contact with Michael over social media and were able to thank him. Grundy’s mother, Lindsay, stated that there’s no doubt there are still awesome people in the world. 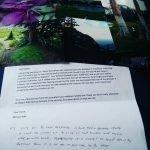