Around 100 people enjoyed dinner and then learned a lot about their relationships with each other on Monday night as Carbon School District sponsored Youth Protection Night. 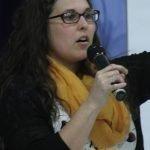 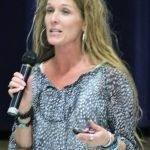 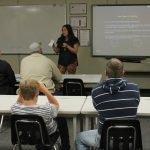 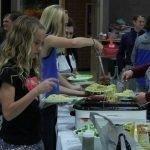 People lined up for the dinner that was provided. 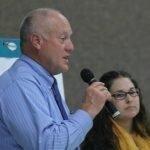 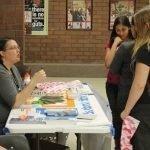 Various agencies had booths at the event.

The annual event takes place in the fall each year, as part of the districts efforts to help parents to understand their children better, and to get kids to realize that their parents have their best interests at heart.

The keynote/dinner speaker for the evening was Angela McCourt, the Director of the Castle Country Youth Center in Carbon County. McCourt told the audience that relationships with children take work and that to make that happen we need to remember all the sides of a story when we are dealing with them.

“The wrong reaction to what kids do and say can bring bad results,” said McCourt. “We need to be sure that we are seeing our children as people, not objects.”

She talked about how many people see their kids as something to deal with or things that must be done. She said when parents fall into what she called “collusion” they think of themselves and their needs as the most important, they tend to blame others for problems and it creates a situation in which it prevents people from actually getting what they want.

“We sometimes see our children as something that needs to be done,” she said. “Like in the morning when they need to get to school they need to get certain things done before they go. That can turn them into objects rather than people.”

She said that to get the result we want from our children we need to stop being negative and move toward more positive action, even in times when things are not going right.

She told the audience that people parents should teach and model skills they want to see in their children.

“We all need to stop and think about what we are doing, we need to brainstorm problems, assess the situation, plan what we are going to do, and then we need to change,” she said.

When McCourt was finished the group went to different break out sessions on various topics, led by experts in the areas being addressed. Karee Hunt did a class on suicide awareness and Arthella Williams did one on bullying. A class on internet safety was provided by Brian Judd.

There were also classes on substance abuse (Four Corners Mental Health) along with a class given by the Carbon County Drug Taskforce.

There was also instruction given on families including a class on healthy relationships (Sandi Regruto and Shelly Wright) as well as one on strengthening families (Polly Atwood).