A rare discovery 64 years ago revealed details about the Fremont Indian culture and shaped the future for one local family.

In 1950, Clarence Pilling came across 11 clay figurines housed on his family’s farm in the Range Creek area. The discovery has been hailed as the most complete, well-kept and ornate collection in existence. For Pilling’s son Bud, the find was more important, but on a personal level.

“I love talking about it,” Bud explained. “My dad found something no one else ever has found. I think it’s important to tell his story.”

Bud, who will turn 80 this year, hopes to share this story with everyone he can.

Nestled in his comfortable gathering area near his home, Bud relived his father’s experience.

“In 1945, he bought two ranches, about 80 acres in Range Creek,” he began. “During the winter, cattle grazed on the land and ate snow to stay hydrated. It was during this time in 1950 when my dad came across the figurines.”

In an area of the Pilling’s lower ranch, near a trail called Christmas, located close to Horse Canyon, Clarence prepared to move the cattle to a different location. Before doing so, he climbed a steep, rocky cliff to get a better vantage point of the land.

Crawling onto a rock, Clarence looked over onto a sandstone ledge where he noticed the clay figurines. Overwhelmed by curiosity, he began examining the small, delicate pieces of Fremont art. It was then that he decided to remove the figurines and carefully transport them to Price.

In 1950, no laws were in place that stated ancient artifacts could not be removed from their original resting areas. Today, however, Bud joked that it’s a whole different world and his father would have been in hot water for removing the figurines.

At the time of the discovery, Clarence was working the ranch with four other individuals who thought it would be a good idea to separate the figurines. “My dad wouldn’t let them split it up,” Bud stated. “He wanted the collection to stay together just the way he found it. He was after all, the only person to discover the figurines.”

Soon after returning home with the clay figures, Clarence contacted archaeologists to find out more about the artifacts. The collection was sent to the Peabody Museum in New York and after some research, it was determined  that the Fremont people had created the figurines approximately 1,000 years ago.

Each figurine was coated with lacquer at that time, in order to preserve the items. The New York museum as well as several others, offered to pay Clarence for the collection. “He wouldn’t sell them for anything,” Bud laughed. “He wanted them in a local museum, near the place where they were discovered. They have been at the prehistoric museum ever since.”

Although the collection has been housed at the USU Eastern Prehistoric Museum for decades, one figurine was missing for quite some time. It’s not quite clear how the individual artifact came up missing, but Bud explained that it was returned one day out of the blue. “A package with no address was sent to an archaeologist and it contained the missing figurine,” he explained. “Fingerprints were taken, but the mystery was never solved.”

A permanent display is located at the prehistoric museum that explains the discovery of the Pilling Figurines. For Bud, the display highlights his father’s discovery, of which he is extremely proud.

Although the Pilling ranch is no longer owned by the family, Bud explained that the area is close to his heart. “I have been to the exact location five different times,” he said. “The last time, in 2004, I should have died there. I made the climb but it took a long time. When I returned home, I woke up on an ambulance headed for Provo. They said I needed open heart surgery. It almost killed me, but it was important for me to visit the area one last time.”

Photos and replicas hang on the walls of Bud’s residence, memories of his father’s discovery. Documentaries have been filmed and many national articles published about the Pilling Figurines, all of which make Bud smile.

“I’m very passionate about this,” he concluded. “I hope everyone who reads this will visit the museum and see the figurines for themselves.” 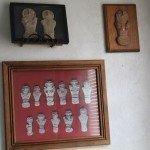 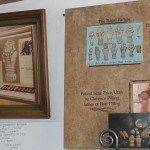 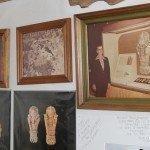 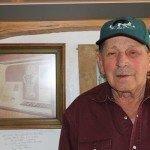 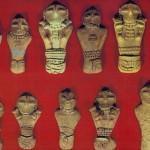