When Mark Jespersen, owner of local bike shop Altitude Cycle, started up the Carbon MTB team, three sophomore friends signed up. After the first race that year, Jespersen had the vision and goal of developing a venue site and race course that these three sophomores could race their senior year instead of traveling four hours away. Although two of those initial three are no longer participating on the team, Sam Carpenter got to compete on the new home trail.

After being granted permission to use land owned by Utah State University, Jespersen began designing the trail last fall. Once winter melted away, he began recruiting businesses to help with the main dirt work and coordinated efforts with local youth groups and community to help refine the trail in order to host the fourth NICA South Region race, which took place over the weekend.

Jespersen would like to extend a huge thank you to Jesse McCourt of Waste Water Logistics, Brock Johansen of Emery Telcom, Gary Straquadine of Utah State University Eastern, Rick Krompel of CJ’s, Greenwell Inn and Tangerine Eatery for donating their time and equipment in the construction phase of the trail. This event would also not have happened without Mayor Mike Kourianous of Price City and Carbon County Commissioners Casey Hopes, Larry Jensen and Tony Martines’s enthusiastic support.

After months of trail work and some modifications by the NICA league, 663 teenagers (9-12th grades) descended on Price to compete. In all, approximately 2,500 family, coaches and friends came to participate and hundreds of volunteers, many locals, participated to make this event incredibly successful.

The Carbon team had a little extra pressure on their shoulders since this was not only their home trail, but the team has spent many hours working on the trail this summer. Unfortunately, none of the freshman riders took first place but Trevor Worley took eighth in his group while Colin Fausett, Nathan Engar and Spencer Tullis each rode a solid race. There are two JV groups and both raced incredibly well. Joey Barlow took first place by more than 30 seconds while DJ Emerson took sixth in a photo finish (a half a second behind fifth place and a spot on the podium). In the B group, Carpenter didn’t crash (unlike the last race) and finished fourth while Craig Olson took first place again with more than two minutes between him and second. Olson has finished first in all four competitions.

After the Price race awards, the NICA league handed out region awards and the Carbon MTB team is making some noise. Olson took first place in the South Region and Carpenter sixth while in the C group Barlow took third place and DJ earned fifth in the South Region.

The next stop is Cedar City and the state championship. Let it rip, Carbon! 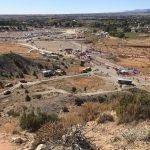 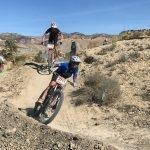 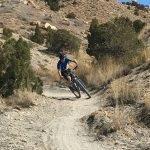