The Region 12 Tennis Tournament took place over the weekend and included teams from both Emery and Carbon.

In first singles, Emery’s Jordynn Wolford was victorious in round one against Gunnison 6-3, 6-4. She beat out Grand in the semis 6-2, 6-2 to advance to the championship match. Wolford lost to Richfield 0-6, 0-6 to place second. Lindsey Snow (CHS) won her first match 6-1, 6-2 against South Sevier but lost to Richfield in the semis 2-6, 2-6 to go to the third place match. She beat out her opponent from Grand 6-2, 6-4 to take third overall. Snow was the only player to win a game against the top girl from Richfield, which she did four separate times.

Carbon’s Nicole Swasey and Lady Spartan Morgan Hughes met up in second singles in the first round. Swasey got the best of Hughes to take the close match 6-2, 2-6, 6-4. Swasey then lost to Richfield in the semis 1-6, 0-6 but rebounded in the third match for a 6-2, 6-1 win over South Sevier to take third place. Hughes also bounced back after her loss and won her next two matches against Wasatch Academy (6-0, 6-0) and Gunnison (6-2, 6-3) to take fifth.

Another Carbon/Emery match-up occurred in the first round of third singles. Lady Dino Ana Maria Olivas and Carlie Bennett (EHS) went toe to toe in a tight first game. Olivas grabbed the victory 7-5 in the first game and then went on to win the match with a 6-1 second game. She was then swept by Richfield 0-6, 0-6 and lost in the third place match 6-4, 2-6, 4-6 against South Sevier to take fourth. Bennett only lost two more games in the day, beating San Juan 6-1, 6-0 and Gunnison 6-0, 6-1 for fifth.

Carbon and Emery met in the first round for a third time in first doubles, but it was Emery that had the upper hand this time. Jessie Nicholson and Haley Guymon defeated the Dino duo of Alex Cartwright and Duda Lopes 6-1, 7-6. Nicholson and Guymon then beat Gunnison 6-7, 6-2, 7-6 in the semis. Gunnison was undefeated on the year so the semi win was a huge feat for the Lady Spartans. They then fell to Richfield 5-7, 3-6 in the championship round but took home the silver. Cartwright and Lopes won their next two matches against Wasatch Academy (6-2, 7-5) and San Juan (6-7, 6-1, 7-6) to take fifth. They won the last game in a back and forth, 9-7 tiebreaker.

In the final category, Megan Hess and Shaylee Grange (EHS) took the first round against Wasatch Academy 6-1, 6-0. Carbon’s Kaydance Scovill and Lizzy Blackburn also won their first round verse Gunnison 6-1, 6-0. With the Emery and Carbon wins in the first round, the two teams met up in the semis. The Spartans duo bested Carbon’s pair 6-4, 6-1. Hess and Grange lost in the finals to Richfield 3-6, 2-6 but grabbed second place. Scoville and Blackburn fell in the third place match 1-6, 2-6 to take fourth.

The top five finishers in each grouping of regionals moves onto state, so each competitor from both Carbon and Emery qualified for state. Emery took second place overall as team in region. Head coach Gwen Nielson was ecstatic about her group. “The girls played so good. We ended up taking second place in region! All of our girls are going to state next week!”

The state tournament will take place at Liberty Park in Salt Lake City from Oct. 10-11. 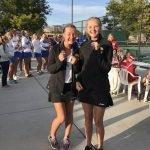 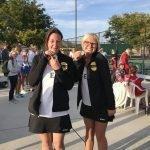 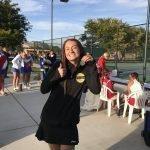 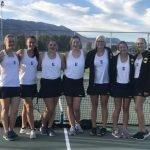 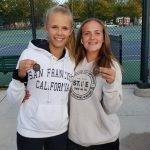 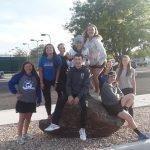