This honor went to deputy Sawyer “Andy” Leonard. Leonard has been with the county for ten years. Before turning the time over to Sgt. Addley to speak on why he was nominated, Barnes reflected on what a great job he does at the sheriff’s office.

While there was a specific incident the Sargent touched on, he also stated that there was not just one specific reason that Leonard received, or was so deserving of, the award.

“I can’t speak highly enough about deputy Leonard. Everything he does is 100%” Sgt. Addley said.

The deputy is stationed at Castle Heights Elementary school. Back in December, just before the Christmas holiday, Leonard was at the school when a child approached him with a Christmas card and thanked him for all he did. Inside the card was a Walmart gift card.

Rather than using the gift card for personal purchases, Leonard then went out and bought a meat and cheese try for everyone at the sheriff’s office to enjoy. Sgt. Addley reflected that this told a lot about Leonard’s every day character and approach. Commissioner Tony Martines stated that he appreciates Leonard’s conduct and attitude, with commissioners Casey Hopes and Larry Jensen agreeing to the sentiment. 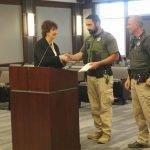 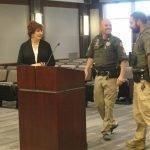 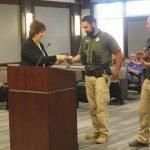