Members of the media were welcomed to the Carbon County Sheriff’s Office (CCSO) on Wednesday morning for a press conference regarding an incident that occurred in Wellington City on Tuesday evening.

This incident, occurring at approximately 7 p.m. near 900 East and Railroad Avenue, involved a reserve officer of the Wellington City Police Department responding to a suicidal male that resided in the city. The suicidal male was identified as 26-year-old Bobby Ray Duckworth. He sustained fatal injuries resulting from an altercation with the officer. The officer was not harmed.

Wellington City Police Chief Rory Bradley spoke first, stating that the incident is currently being investigated and the officer was placed on paid administrative leave per the Wellington City policy. He continued by stating that more details will be given as the investigation continues. Chief Bradley expressed his sympathy to the officer involved, whose name will not be released during the investigation, as well as the family.

“I would like to express our heartfelt sympathy to the family of the deceased,” Chief Bradley stated.

Following Chief Bradley, Carbon County Sheriff Jeff Wood spoke, extending the office’s thoughts and prayers out to every family member involved. He then stated that this is a multi-pronged investigation and the scene is still an active crime scene, meaning that it will remain closed for the time being. The investigation is being led by the CCSO, the Emery County Sheriff’s Office (ECSO) and the Price City Police Department (PCPD).

Sheriff Wood then informed the media present that there was body camera footage on the officer involved and it will be reviewed on Wednesday. The scene, according to Sheriff Wood, is an extensive one and there is still a large amount of work to be done. He also stated that he is grateful for all of the allied agencies assisting with the investigation.

Speaking last was Carbon County Attorney Jeremy Humes, who echoed the thoughts of the sheriff and chief for thoughts and prayers to those involved.

He stated that the attorney office’s role will be to assist in the investigation with two individuals in the office assigned to the case. He continued by informing all present that they will conduct a review once the investigation is complete and wished to compliment Chief Bradley for contacting the office right away to be involved. He then stated that there is not much more to provide at the moment but that they were willing to welcome questions.

Through a string of questions, the trio informed all that Duckworth did have a small amount of criminal history with an incident that occurred earlier in the summer. However, that case is also pending in the court system.

It was also released that the officer involved has been employed with Wellington City for close to one year and is a full time officer in another department in the county. The scene will be processed on Wednesday with information expected to be released to the county attorney in the coming days. From there, it is under the decision of the attorney’s office when further information will be released.

“It’s amazing in the rural part of the state to see how the local community and resources come together in a time like this,” said Sheriff Wood.

The attorney’s office will assess the body camera footage and determine what may or may not be released from it. 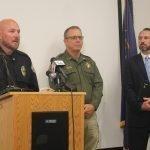 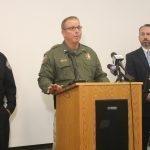 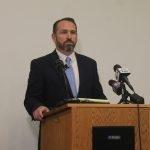 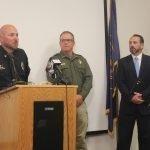