The girl’s team captured thirteenth place overall, with each member setting a new personal best for the course. Each of the three boys who qualified individually also had strong performances.

The girls were led by sophomore Emily Broadbear who finished with a time of 20:40. Sophomore Zaharah Rossi was the second Carbon finisher in 21:05, while sophomore Sarah Ohlwiler was the third in 23:20. Senior Madi Black finished fourth for the girls with a time of 23:43 and junior Nikki Kulow rounded out the team with a time of 24:45.

Head Coach Tellise Allen said she saw a “very strong performance from such a young team.” The girls’ team is composed primarily of underclassmen: two freshmen, three sophomores, just one junior and one senior. “They ran among some of the strongest teams in the nation,” she explained. “The top three girls in 3A are ranked nationally.”

Though the boy’s team did not qualify for state, three of the Carbon boys qualified individually during region. Sophomore Drew Jones was the first Carbon finisher with a time of 18:27, beating his record on the state course last year. Trey Richardson finished in 18:44, also finishing with a new personal best for the course. Paul Bryner finished in 18:59, despite being sick. 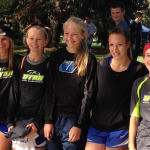 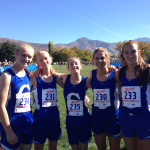