During the Carbon School Board regular meeting on Wednesday evening, board vice president Jeffery Richens was asked on behalf of Jared Butler, Carbon High School’s physical education teacher and boys’ basketball head coach, to read a letter that Butler had written to the board on July 2.

On June 29, Carbon administration confirmed that they had relieved Butler of his coaching position. This was Butler’s first year coaching boys’ basketball at Carbon High School (CHS). Before his appointment at Carbon, he also coached for a number of years at Emery High School as an assistant coach.

Both Carbon and Emery county citizens expressed outrage with the district’s decision. Once the news surfaced, community members began reaching out to administration with their concerns. Due to the outcry, a second meeting took place on July 1 where an apology was made and the coaching positions were re-extended.

“I showed up to the meeting Wednesday in hopes of having a better understanding of why I was fired,” Butler stated in his letter. “I am still as confused today as I was Wednesday. We were given a list of expectations as a coaching staff, we feel that we were already meeting and even exceeding those expectations. The first was concern was over our summer workouts.”

Butler explained in his letter that the boys’ basketball team has been working out during the summer, but only when allowed. He also stated that he confirmed this with CHS Principal Chris Winfree, though now Winfree states he disagrees, according to the letter. The second concern brought to his attention was communication. “We have great communication, both collectively as a team and also on an individual level.”

“The third concern is the hardest one for me. The expectation is that coaches should be positive with players,” Butler wrote. “This was the first reason I was given for my firing. That I was too negative, degrading and not positive enough. Accusing me of this is nothing less than slander.”

Butler proceeded to explain that he has worked hard with his team to establish a good reputation. His coaching staff has prided themselves on the way the treat their players and how they have taught their players to treat each other.

“We have never degraded a kid,” the letter read. “We have coached kids, pushed kids to be better, but never degraded. I know we all have room for improvement, but this accusation was completely unfounded, unfair and frankly, hypocritical.”

In the letter, Butler wrote that his desire is to put this behind him and move on. He asks the community to do the same. “Our main concern is that this doesn’t happen in the future, to others. I truly appreciate your support as school board and I hope that in discussion about this with Mr. Hatch and Mr. Winfree, you guys are able to find more answers than I could.”

He also stated that he can work with Principal Winfree and he does not wish for any of the administrators to lose their job. “I want to do what is best for kids. That is all I have ever wanted. I hope we can work together to love, teach and hopefully coach them.”

A few days after this letter was written to the board, Butler took to social media to express his appreciation for the community in video format. He announced that he will be returning as the head coach for the Dinos because of “all the support we’ve received, it would be hard to our back on that. That’s one reason. But the main reason is for these young men.”

“It will take a lot of time to restore our reputation to what it was prior to this event,” Butler wrote.

As he was folding up the letter, Richens announced once again that Butler requested the letter to be read for the public record. Richens proceeded to explain the many apologies have been extended and accepted.

“The board as a whole is working with the superintendent and the principal to put things in place to make sure, ensure that procedures are followed and things don’t just happen again in the future,” stated Richens. 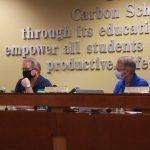