The entrepreneurial spirit is strong and alive in many people. For Tom Lund, that spirit has always been there.

“I have wanted to build businesses since I was a kid,” he said as he stood in the middle of Castle Gate RV Park in Helper. “I had started three other businesses in my life and purchased three others before this, but I was looking for one that I could create from the ground up.”

Literally, with his latest endeavor, that is what he did. Actually, the ground was a hay field on the south end of Helper until just about three years ago. He had a dream of creating a place where people could stay in their recreational vehicles, in a tent or in a cabin.

Lund began with the idea. The plans were there, the drawings made up, what it would cost and what the opening would look like. He went through seven different financial institutions before he found one that could help him to make his dream come true.

“I ended up going with a bank from Arkansas that really understood what it takes to build and open an RV park,” he said. “The other lenders that I dealt with said they understood, but they really didn’t.”

Today, the park has 106 spots for those who want to stay, including 98 RV spaces, eight tent camping spots and six cabins. They have horseshoe pits and a playground with a splash pad. The main building, a majestic barn, is the gateway to the park. This building houses the registration desk, a store, laundry, restrooms with showers and upstairs is a reception hall that Lund said some day he would like to see filled with “wedding receptions and parties.”

Once construction got rolling, it took off. By April of 2019, he and his crew were ready to open the park. However, two weeks before the opening, Helper City came to him and told him that two of his cabins needed to be moved because they were within the Price River’s flood plain.

“I couldn’t believe it,” he said. “I still can’t understand why they didn’t tell me earlier.”

He is happy with the success the park has had. Some people bring in RVs and stay for months while others stay just overnight. Some stay because they have work in the area while others come for a vacation to get away from their regular surroundings.

“We even had one family who have stayed with us several times who are from Price,” he stated.

The exact economic impact that the park has had on Helper itself is unknown, but he has had businesses in town tell him that their bottom line has been positively impacted by those who stay in the park. During the summer season, he has created 13 new jobs in town.

The park has many good reviews on Google and other travel sites. The number of reviews are equal in number to what many parks that have been around much longer have received.

“We have been successful because I have had a lot of good people working here with me,” he said. “When I hire employees, I look for people who care and people who show it. Those that are traveling need to feel that they are being taken care of by people who actually want to talk with them and are interested in them.”

Lund said that there is some space at the end of the park that could still be developed for future spaces, but right now he is concentrating on making the park the best it can be in its present form.

“I wanted this park to be an economic driver for Helper, and I think we have done that,” he concluded. 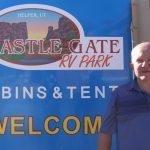 Tom Lund stands next to the sign that is at the entrance to the Castle Gate RV Park. 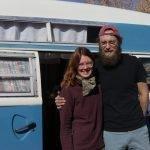 Two of the happy campers that have stayed at the park. Aaron Swick and Claire Vickmann are from Ohio and they both are remotely working as they travel in their Volkswagen Bus. They said the park is the perfect setup for them as they were looking forward to many adventures around the area while they stayed in Helper. 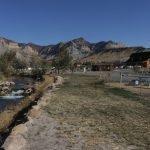 The Price River runs by on the west side of the park, providing a nice view and the sound of refreshing water running by. Lund is working on many improvements for the park along the river. 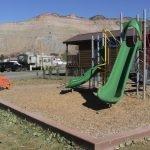 The playground that is located by the General Store, along with some horseshoe pits. 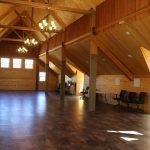 The reception hall that is above the General Store in the park can be used for parties or events. 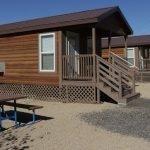 Three of the six cabins at Castle Gate RV Park.