Emery County Public Lands Chairman Rod Player shared two letters with the council on Tuesday. The first letter came from the United States Forest Service asking for comments or concerns on a project being constructed in Sanpete County on the west side of the Manti-La Sal Forest. The project is a large parking area/trailhead in Wells Canyon. This letter had been sent to all public bodies in the district, but the council felt like since it was not in Emery County, they would not make a return statement.

The second letter was from the Office of Surface Mining and Reclamation. This was an annual evaluation letter regarding the Division of Oil, Gas and Mining. The letter requested comments from the council. The comments were that they would like to go on record as supporting all coal mines and mining in Utah. The council also questioned the reclamation of abandoned mines in Emery County. The council would like to keep the historical value of the sites and were anxious to help access that historical information, especially for the uranium mines in the Swell.

Emery County Commissioner Kent Wilson then spoke to the council about their recent meeting with Congressman John Curtis. He assured the commission that the Red Rock Legislation was a symbolic bill and had very little chance of being transacted.

Commissioner Wilson next reminded the council and audience of the RAC meetings on Wednesday and Thursday of this week. This RAC committee was a result of the Dingell Act’s requirement for a recreational board. They will be considering recreation and camping on the recreation area created by the legislation. He stated that it would be very advantageous to have comments from citizens. Commissioner Wilson also reported that in the two years following the Dingell Act legislation, he has nothing to regret.

Jay Mark Humphrey, manager of the Emery Water Conservancy District (EWCD), then requested support from Emery County, specifically the lands council, regarding the smaller reservoirs above Joe’s Valley; i.e. Grassy Lake, Potters, Soup Bowl, etc. He received a letter requesting a form be completed, signed and returned to request a special use permit to manage and maintain the reservoirs. The district would then be charged an annual land use fee.

Humphrey said he feels that these reservoirs were intended for the recreational use of the public so they should be exempt from any fees. The Emery Water Conservancy District received the reservoirs in 2020 when the title was given to them for Joe’s Valley. He was reminded by the Washington delegation present and online that there are similar problems in other areas of the state. The lands council voted to write a letter in support of the EWCD.

Chris Conrad, Bureau of Land Management, reported that the Easter weekend visitation in the area was up dramatically. He also reported that a jungle gym apparatus, which will look like dinosaurs, is being added to Jurassic National Park area. Conrad said that rivers runs are happening on the Green River with two runs per day and about 25-50 people per day. He then reported that because of the drought, letters have been sent out to permittees concerning grazing restrictions.

Dana Dean, Division of Oil, Gas and Mining, reported on a small mine, Ivy Creek, two miles south of Fremont Junction. It will be owned and operated by United Minerals. She stated that the Murray transfers are close to completion on the former Bear Canyon and Rhino mines. Crandall Canyon is in the final stages of reclamation, and Bronco and Sufco seem to be humming along.

Chris Wood, Division of Wildlife Resources, reminded that the wildlife RAC meeting for this area is on April 14 and they will be dealing with big game recommendations. They need three new members, including two agriculture and one sportsman, and are accepting applications. These applications can be found on their website.

According to Wood, range specialists are counting sage grouse and bald eagles. Land use committee members questioned about the stocking of Jewkes and Van Buren Reservoirs as well as the infestation of antelope in the southern fields that are becoming quite a problem.

Acting Forest Service Ranger Matt Way then reported that their spring activities are underway. They are looking at range programs and operating plans as most of their permanent employees are back to work. Gates will begin to be opened on April 15 in the lower areas and then continue upward after that.

Way reported that herd size will be reduced as well as entrance dates on the forest for permittees due to the drought. Council member McElprang commented that his permit now only entitles grazing for 90 days of the whole year. He continued, saying it is devastating to keep going on later because of range readiness.

Larry Johansen, Utah State Parks, exclaimed that both Millsite and Huntington were more than full for the Easter weekend. He also reported that the Goblin Valley State Park campground will be expanding by 40 to 60 sites, which should be finished within the year. 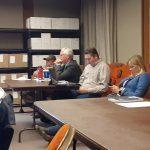 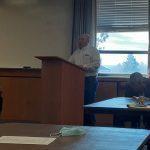