In early June, 20 bikers left New York City as a part of the Beyond Type 1’s Bike Beyond program to bring awareness to Type 1 diabetes. All of these cyclists are living with this disease and are insulin dependent.

As they make stops they are hoping to educate, advocate and eventually find a cure for this disease. The 4,248 mile ride is scheduled to end in San Francisco, the birth place of this non-profit organization, on August 11. The 20 participants come from throughout the United States as well as New Zealand, United Kingdom, Canada and Australia. They stated that their mission was “To show the world what living beyond Type 1 looks like.”

Beyond Type 1 was founded in 2015 by Juliet de Baubigny, Nick Jonas, Sarah Lucas and Sam Talbot, and is a new brand of philanthropy leveraging the power of social media and technology, changing what it means to live with a
chronic disease. With a focus on education, advocacy, and the path to a cure,Beyond Type 1 has developed a broad ranging portfolio of grantees and programs aimed at improving the lives of people impacted by Type 1 diabetes, with one of these programs being Bike Beyond.

Wednesday evening found Bike Beyond at the Community Center in Green River. They had cycled from Moab and were headed to Fruita, Utah on Thursday. Other stops in Utah will include Antimony and Milford.

The riders spoke about the heat and difference in humidity as they have crossed the continent. They have a support van and at times have spent a day or two riding in the van but get right back at again. So far, Bike Beyond has made stops in 15 states. 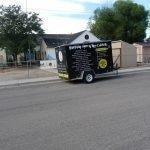 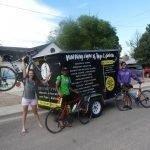 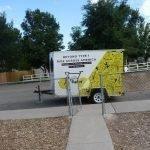