Construction crews work on the roof at Mont Harmon Middle School. This summer work will cap off a two phase program to replace the roof and the heating/cooling system in the school. The first phase was done in the summer of 2016.

Each year Carbon School District expends money on capital projects for existing school buildings, usually with the construction segment of that spending being the largest expenditure. And for construction to take place, most of it is usually done in the summer. This summer is no exception.

Across the district five major projects have been taking place, while smaller projects and upgrades are going on in all but two schools.

The largest project is the revamping of Mont Harmon Middle School which was begun last year in phase one and will be completed this year with the second phase of the effort. This year, to go along with what was done to the classroom and office section of the building, the roof is being replaced on the shop area, band/choir rooms, auditorium, cafeteria and gymnasium. But roof replacement on the now 50 year old building meant more than just putting on new roofing materials. As of this fall the old heating system that had served the school since the late 1960s will be gone and replacing it in all areas of the building will be roof top heaters, and with that addition the entire school will also now be air conditioned as well. Many more things have been done to the building, including electrical upgrades where needed.

“These upgrades will keep the building going for another 50 years,” said Kerry Jensen, the Facilities Director for the district. “In every other way the building is sound and in very good shape.”

The cost of that project for both phases is $5 million plus. In comparison having to build a new school to replace it would have cost five to six times that much.

Two projects that are similar in some ways to each other are also going on in two other schools: Castle Heights Elementary and the Castle Valley Center. The Castle Valley Center is getting their parking area expanded with between 50 and 60 new spaces being added west of the existing northern lot at the school.

Castle Heights is getting its parking lot expanded also with over 70 new spaces being put in to alleviate the parking problem that has occurred at the school for years. The cost of that construction is around $400,000. The school is also having a security lock system/access control system installed along with a security wall and doors for the kindergarten rooms on the north end of the school.

Another major project is taking place at Sally Mauro Elementary where the office is being remodeled. The remodel will completely change the way the office is set up and is costing right around $100,000 to complete.

The Lighthouse High School is having some changes done. The entire school will be heated and cooled by roof top units beginning this year as the cafeteria, gymnasium and halls will all be provided with new equipment. The boiler in the building has been removed so that room is being remodeled into a FACS room. In addition an old archive room is being remodeled into a workout room for students. The classroom areas have been on roof top heating and air conditioning units for some time.

Other projects in the district include a new intercom system at Carbon High and a new phone system installed in Helper Middle School as well. 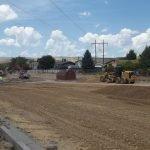 Workers prepare the subsurface for asphalt at Castle Heights Elementary. Over 70 new parking spaces will be put in, alleviating an on going parking problem that has existed for years. 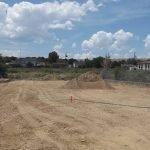 The restricted parking space at Castle Valley Center will be relieved due to the installation of over 50 new parking spaces. 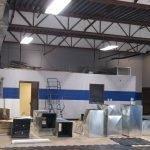 The new workout room at Lighthouse High School will have overhead heating and cooling units. The boiler system at the school has been abolished, providing for better ventilation and more temperature control in each area. 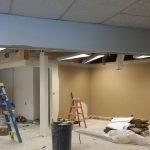 The office at Sally Mauro Elementary School is being remodeled from its original form that was built in 1966.