When Frank Ferderber came back from living in Logan to help his father Greg with the business that is now known as Echo Industries, he had some reluctance. After all, he had gone to school at Utah State University and loved the area. But his father told him that with the acquisition of Cyprus Cable Repair, and the continuing business in providing leather goods to the mining industry, he needed the help.

The younger Ferderber has never looked back since.

Echo Industries was started by the senior Ferderber in 1982. He had been a miner for 15 years and then went on to teach at the mining department at what was then the College of Eastern Utah.

“I think maybe working those long hours at the mine made it so the college job wasn’t enough,” said Frank as he sat in his office in Carbonville. “He started the leather business and would go out and make calls starting at 5 o’clock in the morning and then after a day at the college would make calls in the evening as well.”

The products Echo Industries has supplied for years to a 24-hour, 365-day-a-year industry has grown because times have changed. Miners must carry around various kinds of pouches for meters, lights and other items while in mines. A regular miner might only have a couple of pouches on a belt while a fire boss or foreman might carry six or seven items.

“As the meters and equipment change, we have to build new kinds of pouches to carry them in,” said Frank. “Almost every year something is new.”

The original leather business was just a sales business. Greg had contracted with a man to build the items he sold. But when the man decided to get out of building the product being sold, Greg bought him out. That is where BEAR came in.

“BEAR has been of great help to us,” said Frank. “They helped us get a grant to build the building so we could grow and expand our business.”

Over the years, the business has moved from a one-person operation to four full-time and two part-time employees.

The market for both operations, the cable repair business and the leather business, is very narrow and through the Economic Gardening program, Frank said they have been looking for ways to expand what they are doing. They continue to work on that.

The business itself may be located in coal country, but the company also does work for the copper, potash and trona mining industries as well. While the requirements are different, hard rock miners need their equipment and repair services too.

“We do 85% of our business with the coal mines,” said Frank. “But we have done work through both sides of the business in places like New Mexico and Wyoming. In fact, Bridger Coal is one of our biggest customers.”

The shop where the leather goods are manufactured is an exhibit to the art of leather work creation. Molds hang on the walls and various pouches of all sizes and types hang in another part of the shop.

“We have also started to create and sell nylon belts and pouches as well,” said Frank. “Some miners prefer those to the leather.”

That part of the business is run by Tiffany Ferderber, Frank’s wife. She does the sales as well as works in the shop.

“When the cable repair business has been slow, this has kept us going,” said Frank as he stood in the shop.

Because of the can-do attitude of both the ownership and the workforce at Echo, and the ability to adapt to new developments, the business continues to thrive and grow. 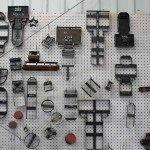 The patterns for the various kinds of pouches produced in the leather shop. 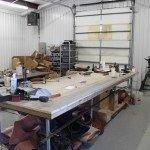 Part of the leather shop operation. 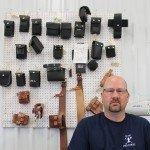 Ferderber sits in front of the many kinds of pouches produced in the shop. There are more kind designed and created each year because of the changes in meters and equipment. 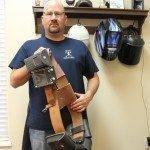 Frank Ferderber shows off one of the belts his company produces with attached pouches that are used by miners in many kinds of operations.