At the last Emery County Commission Meeting of 2018, commissioners and elected officials thanked Commissioner Paul Cowley for his years of service to the county. They expressed their appreciation for working with him and the work he has done. Commissioner Cowley, in turn, expressed his gratitude for serving with all of them.

As the meeting commenced, Richard Chamberlain from the U.S. Forest Service gave a presentation of the Youth Conservation Corps program partnered by the service.

He explained that the program encourages higher education for high school students, explores careers for members and helps them set priority goals. It also helps the Forest Service by providing employees to cover its many jobs. Chamberlain stated that college or tech school enrollment is dropping in Emery County and this program could help reduce that. He asked for funding from Emery County for the program but the commission tabled the matter for more study.

Approval to rescind Emery County Resolution No.12-20-2016B was approved and a new resolution amending Resolution Nos. 12-20-2016A, 4-6-99A and 4-01-08B was also approved. This changes the percentage of the mineral lease money distributed to various entities in the county, such as the Emery County Special Service District #1, Emery County Road Department, Castle Valley Special Service District, Local Building Authority of Emery County and the county’s recreation district. This was only for a one-year period and was the responsibility of the commissioners.

Following ratification and approval of various annual contracts and memorandums, a motion to enter a public hearing on the opening and amending of the fiscal year 2018 budgets for Emery County general fund, special revenue funds, capital project funds, local building authority and Castle Valley Special Service District was made and approved. There was no public comment made during the hearing. A second public hearing was then opened on the FY 2019 proposed budgets. Previous discussion on mineral lease money increases and how the commission plans to distribute these monies has already been voted on and approved, so the public hearing was closed with little input.

Next, Commissioner Kent Wilson announced that Robbie Jensen will be the new Emery County Aging Director and will also hold the same responsibilities in Carbon County. Wilson remarked that this would be advantageous for both counties.

Approval was given for the signing of an agreement with QT Petroleum for an On Demand M4000 fuel terminal at the Huntington Airport. A subsequent service agreement for subscription services on the M4000 fuel terminal was also approved. This should help to alleviate the fueling problems some have experienced at the airport in the past.

As was fitting, Commissioner Cowley made his last motion as commissioner to adjourn the meeting. Commissioner Gil Conover will be sworn in this January, taking Cowley’s seat. 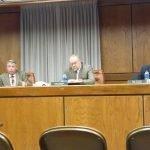 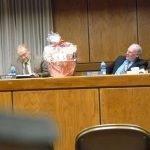