At the Emery County School Board meeting on Wednesday evening, Brandon Johnson, a bond attorney, explained to the board the steps and procedures required by law to conduct a bond election. First, he explained why a bond election is necessary, showing in a presentation that school districts have to have a bond election to issue a bond payable by property taxes. A majority of the voters must approve the bond before the district can move forward.

Alex Buxton, Zions Bank Financial Representative, added that the rates are very low right now and it is a good time to bond. It will be a general obligation bond not to exceed $75,000,000. This means that if other facilities are needed, it will be available for the district without bonding again.

The steps necessary for a bond election include an election resolution, a ballot sent to the State Lt. Governor’s Office and the county clerk, a statement prepared by the board in agreement of the bond, a public hearing and a notice of a special bond election in a voter’s information packet. A notice must be published for three consecutive weeks in a local newspaper of record beginning on Sept. 29.

The board has already been working on these steps and much of it has already been accomplished. Although the county clerk will count and tally the voting, it will be the board’s responsibility to canvass the results. If approved, the bond must be issued within ten years. Johnson informed the board that in order for the election to be successful, they need to get the community involved and be transparent with the public. The board was encouraged to work with the civic leaders and groups as well as use visuals of anything to be financed in the election. The bond election will be part of the political election in November 2020.

Principal Doug Mecham welcomed the board to San Rafael Middle School and expressed that in all his years working in education, he was the most anxious he has ever been starting school this year. Both he and Supt. Black expressed appreciation to the entire school and district educational team for their dedication and determination to make the year successful for all. Board President Tracy Johnson also echoed these remarks. 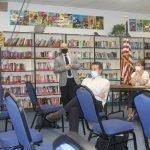 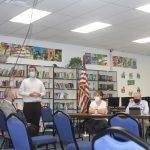