A historical mural in Price City Hall is currently being restored by the Fine Art Conservation Laboratories, Inc.

This mural was started in 1938 and finished in 1941 by Lynn Fausett. He then performed a retouching project in 1961. Many of the scenes are copied from old photographs and portray real people and events. This mural was one of the main reasons for the Price City Hall being added to the National Historic Register.

The mural portrays moments of significance in Price’s history.  Beginning with the first cabin built in 1877 by Abraham Powell, the timeline includes coal mines, railroads and surveyors as well as the first store and post office. The beginning of different religions in the area is also represented, along with the first Justice of the Peace and the first educators in the area. The final images of the mural show the first mayor, W. F. Olson, in 1911 and the coke ovens in Sunnyside built in 1917.

The mural has remained virtually untouched since Fausett’s touch-up in 1961. The FACL has come in to clean years of grime and dust from the paint. They will also use injectable adhesive to glue the canvas to the wall in places where it is coming loose. Touch-up paint will be used where needed to combat water damage and fading.  This project is being conducted to preserve a priceless treasure of local history. 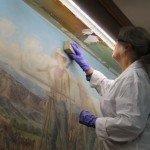 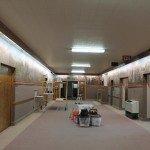 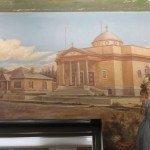 Some buildings in the mural still stand 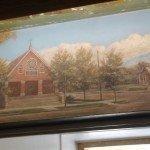 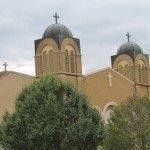 One of the buildings painted in the mural