She was chosen from a field of 16 fourth and fifth grader finalists Thursday afternoon. The top three placers in the fifth grade were Natalie Pace, first, Charlie Hunt, second, and Acelyn Migliori, third. The top three finishers in the fourth grade were Mason Thornley, first, Jamison Christiansen, second, and Kaicee Behling, third. Natalie Pace will now take a test and, if she scores high enough, she will compete on the state level in March at Thanksgiving Point. 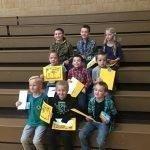 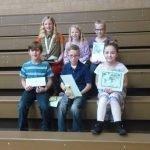