Cole Fossat and Peyton Fausett were named to All-Region 12 teams this week after being voted on by region coaches.

Fossat, just a junior, lead his team in scoring at a 15.2 per game clip. He also chipped in 3.5 apg and 3.1 rpg. Fossat connected on a team-best 48 three pointers. He scored 25 or more four times this season, including a 28-point performance at Emery on Jan. 9 in which he nailed a career-high six threes.

Fausett, also a junior, ranked third on the team with a 7.6 point-per-game average. He also hauled in a team-high 108 rebounds. As with Fossat, Fausett’s best game statistically came against Emery as he poured in a career-high tying 16 points and snatched 10 boards for the double-double in the Jan. 9 matchup.

The Dinos will return four of their five starters next year, losing Garret Blanc to graduation. 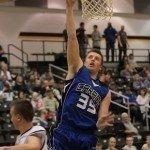