Although the Eastern Orthodox Church is the second largest Christian church in the world, followers of the faith only make up about 1% of the population in the United States.

According to Father Brendan Pelphrey from the Greek Orthodox Church in Price, the Orthodox religion is widely considered a continuation of the ancient original Christian Church.

The name Greek Orthodox Church is actually reference to the body of several Churches within the larger communion of Eastern Orthodox Christianity, whose services are traditionally conducted in Greek.

Besides having no central leader such as a pope, one thing that sets the Eastern Orthodox or Greek Orthodox religion apart from other Christians sects such as Roman Catholicism or Protestantism is its calendar system. In ancient times, the Roman world, most of Europe and other European settlements in the Americas used the Julian calendar system, until it was refined and superseded by the Gregorian calendar in 1582.

However, the Orthodox religion continued to use the Julian calendar, which now causes discrepancies in the dates holidays fall on.

Traditional western Easter is celebrated on the first Sunday after the spring equinox and can fall any time in between March 22 and April 25. Since there is about 13 days difference in the Julian calendar, Eastern Orthodox Easter is typically later. It can fall on the same day or as late as five weeks after traditional Easter.

This year, Eastern Orthodox Easter is one week after western Easter. The week leading up to the Orthodox Easter celebration is, like in other Christian religions, celebrated as Holy Week.

Holy Week consists of fasting in addition to Great Lent, which, like western lent, lasts 40 days but includes Sundays and services every morning and night.

According to Father Pelphrey, the ceremony can look like a traditional Jewish Passover service, but is actually Jewish custom being fulfilled.

Many Greek Orthodox still kill a lamb and eat it for their Easter meal, but instead of traditional Jewish unleavened bread, Orthodox use leavened bread to symbolize Christ rising from the tomb.

Father Pelphrey said they read from the Old Testament and the book of Revelation during their night services because of the prophetic nature of those scriptures. The Old Testament prophesies of the coming of Christ. During the day services, verses from the Gospels and the New Testament are read.

The actual Pascha (Easter) services begin around 11:30 p.m. Saturday night and continue into the wee hours of the morning. They ring bells and have a procession around the church chanting scriptures in many languages and celebrate the resurrection of Christ with a grand feast. They partake of Holy Communion using the leavened bread and then hold a vigil service.

The Greek Orthodox Church in Price continues to thrive. The congregation is made up of approximately 60 locals who come to worship and celebrate Christ.

For more information about service times, visit The Assumption of the Virgin Mary Greek Orthodox Church located at 61 S. 200 East in Price or call (435_ 637-0704 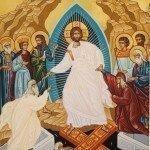