The Emery County Public Lands Council meeting was held on July 5. There were several members of the council unable to attend, though Ben Grimes, Edward Geary, Ray Peterson and Chairman Rod Player were present. As the council is an advisory board, action and discussion were conducted as usual. The meeting began with an appreciative comment about how quickly campaign signs had been cleaned up throughout the county.

Chairman Player then questioned the board members about their desires regarding a field trip, asking where they would like to go and when. After comments about the conveyance of land title at Goblin Valley, it was decided to tentatively schedule a trip there on Oct. 4. This would be in lieu of the council’s regularly scheduled meeting for that month. Some of the things they hope to see at the park are changes, implementations and future plans.

The next item on the agenda was a motion to recommend that Emery County move forward with pursuing the right of way on Long Street in Green River. A letter addressed to the county commissioners was read by the chairman that called for a resolution to this situation, urging them to follow the county’s general plan, which states that Emery Country will maintain public access to public lands. This was passed unanimously by the members.

Agency reports began with Kyle Beagley reporting from the Bureau of Land Management (BLM). He reported that an application for a vendor to sell at the Quarry had been finalized and approved. He also reported that following the land conveyance at Goblin Valley, the national director for the BLM, Tracy Stone-Manning, had been at the Price Office for a question and answer session about procedures and policies. He felt there would be success found with her.

Beagley also reported that the Caine Wash Environmental Assessment (EA) comment period has ended and it should move forward now. He stated that an application for filming on BLM property had been received from Kevin Costner for fall production. A paleontology permit application has also been received from a university working with National Geographic. The informative kiosks on the BLM are being improved and someone has been hired to work on these. Drafts for the San Rafael Desert Travel Management Plan will be open for public comments on July 8.

Priscilla Burton, Division of Oil Gas and Mining, reported virtually that a number of Conoco Philips wells in Emery County have been plugged and another well has been converted to a salt water depository.

Forest Ranger Daren Olsen reported that recreation is increasing on the forest and grazing allotments were filled this past week. An engineering group has been working on two parking lots near Snow Lake. Logging operations near Candland Mountain and Electric Lake are nearing completion and they anticipate the work moving to the Lowry Water and Reeder Canyons soon. Certain trails in this area will be closed during logging activities. Olsen also was glad to report that there had been little fire activity in the area, but they have had forest personnel helping in other areas with fire suppression.

State Parks reported that the parks saw a 15% increase in visitor numbers over the Juneteenth holiday weekend. Golfing at Green River has slowed with warmer temperatures but glow golf remains active. Millsite State Park had a sewer pump malfunction and it will take six weeks to replace it. They are planning to improve the middle of the campground at Millsite with recreational activities for all, such as pickleball or walking trails. When asked about the algae bloom at Scofield, he stated that lower water levels and warmer temperatures activate the growth and different solutions are being considered.

To conclude, Nate Roberts, Division of Agriculture, introduced a new associate, Addie Healy, who is a conservation planner. He also spoke about grant programs available though the USDA office. These include a Water Optimization Program, Emergency Relief Program, Agriculture Voluntary Incentive Program and the Utah Pollinator Program. These can be viewed at ag.utah.gov. 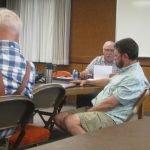 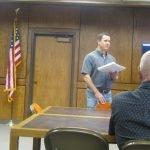 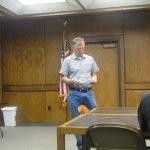 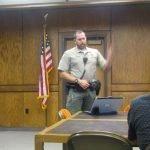