Over one hundred years ago settlers along the Green River realized that water was their life blood and the importance of diverting water out of the Green River to begin irrigating the desert land.

According to Utah State Commissioner of Agriculture LuAnn Adams, the settlers began to try to divert the water by placing a crude refuge in the large river. Of course, this wouldn’t hold and in the 1930’s the dam was strengthened with concrete. Hydro-power and a water wheel were also added to the site at this time.

During the 2010-11 flood, the structural integrity of the dam was compromised. If the diversion would have failed at that time, three irrigation canals, the city of Green River, a historic irrigation delivery system and one hydroelectric plant would have been diminished. Local citizens approached the NRCS to ask for help.

After examination state engineer Bronson Smart said the structure was unstable and needed to be rebuilt. With 75% of the cost of reconstruction coming from the federal government, many specifications needed to be met. This project did not fit the established parameters, but through the work of the NRCS, Utah State Conservationist David Brown finally signed the Record of Decision (ROD) on April 2, 2015, and the work began.

As they spoke at the ribbon cutting, they were quick to recognize the efforts of Roger Barton, UDAF Conservation Districts Resource Coordinator, for his role in arbitrating various viewpoints in order to accomplish this diversion. They also noted that Senator David Hinkins was instrumental in obtaining additional funding for the project. The trio was grateful to Marc Stilson, state water engineer, who told them to “quit fighting and build a dam.” Other names praised at the event were Craig Johansen, Tony Beal and Dan King.

At least 240 people, including Green River High School students, were in attendance at the ribbon cutting. All were grateful the community came together and accomplished the diversion rehabilitation. 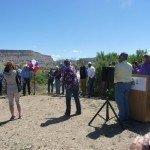 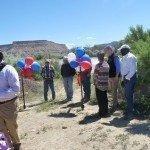