The students of Bruin Point Elementary School have had an exciting first half of the school year, with much more to come. From pendulum paintings to building robots, the faculty and staff have provided a plethora of fun ways to learn.

Recently, first grade students explored the world of geometric shapes, learning about recycling, teamwork and construction as well building robots out of various objects that they collected themselves. The kindergarten students will soon have a similar project, teaching them the same principles. However, these students will be constructing trains.

The second and third grade students will be busy at work in lessons about the water cycle as well as force, motion and gravity, respectively. The water cycle will be taught through a hands-on auditory activity, a science experiment and an award-winning children’s picture book as well as an instrument making activity.

The lesson on force, motion and gravity will incorporate the pendulum paintings. In regards to art, students will learn about famous artist Jackson Pollock. They will also be taught about pattern, rhythm, abstract expressionism and color.

The fourth grade students recently got to experience the rocky cycle. This was accomplished through a variety of activities. Scientists Jedd Bodily and Kristi Bear with the NRCS helped during this project, which was completed in four segments.

During the first segment, students played a game where they adventured through the life of a rock with igneous, metamorphic and sedimentary stages. During the second activity, a dance party took place where students broke it down, rock style.

Segment three brought in the professional soil scientists who took the stage with their soil profiles, hands-on soil texturing and chemical experiments. During the fourth activity, students will complete a follow-up drawing for each stage that they were a part of during the rock cycle game.

Fifth graders at Bruin Point will begin to explore and learn all about land forms by sculpting their own landscapes using salt-dough and color-mixing watercolors. 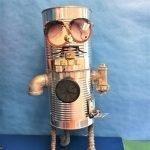