The state archery competition was hosted at the Salt Palace Convention Center in Salt Lake City on Saturday, Feb. 18. Local middle schools Mont Harmon and Helper both attended and participated in this event.

Overall, Mont Harmon was able to snag the third place spot with Helper coming in just behind with fourth place. Mont Harmon students Cayden Steele and Merrick Morgan received the title of second place and third place, respectively, in the state for all eighth grade boys.

Now, the archery team is preparing for the national competition that will be hosted in Louisville, KY this summer. One fundraiser that will take place is a bingo night. Scheduled for April 8 at the Notre Dame Hope Center, the event will feature bingo, food and a silent auction starting at 6 p.m. 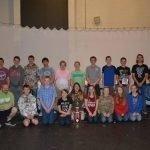