Price City Mayor Joe Piccolo informed the team that they had “been caught” being responsible in the community and doing something that they were not asked to do. He stated that for a softball team, the ball field is like a second home. The Divas were recently discovered pulling weeds, picking up rocks and more to ensure that the field was safe and clean.

Mayor Piccolo stated that the team set a higher example by doing voluntary work such as that. He then went on to say that everyone in the room could learn from what the team was witnessed doing.

“The more people that act like you, the better this place will be,” Mayor Piccolo stated.

The team was then given a standing ovation for their hard work. One by one, the teammates then shook hands with the council members and received a gift consisting of Price City pins and a treat. Mayor Piccolo did not stop there, however. He then asked for the team’s coaches to stand at the front of the room.

Head Coach Brandon Olson, Andy Jones and Ricky Sandoval were thanked and given pins as well. 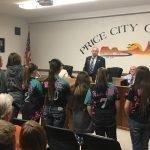 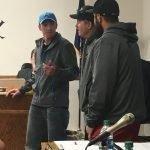 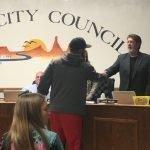