For a limited time only, the Prehistoric Museum at USU Eastern in Price is pleased to host a special exhibit: “Horns & Tusks: Ceratopsians and the Evolution of Bizarre Headgear.” Featuring over 50 odd, outlandish and sometimes even comical animals ranging from the time before the dinosaurs up through the last Ice Age, this exhibit will be fun for the whole family.

Ceratopsian dinosaurs, the focus of the exhibit, are related to the well-known Triceratops but each has a unique set of features on their skulls, including frills and horns of different shapes and sizes. Come explore the diversity of decorative dinosaur skull structures with several full-size skeletons and life-sized sculptures of ceratopsian dinosaurs, an anatomical model of a Utahceratops skull and more. Then compare the ceratopsians to dozens of skulls, skeletons and sculptures from other oddly-adorned dinosaurs, ancient mammals and even modern animals to see just how weird things can get.

“Horns & Tusks” comes to the museum from Gaston Design Inc. of Fruita, Colo. (www.gastondesign.com). Their founder, Rob Gaston, discovered the Prehistoric Museum’s own Gastonia burgei and has a long history of creating engaging, dynamic exhibits. He and his team created several of the mounts on display in the Prehistoric Museum, including the large ankylosaur skeletons that greet you at the top of the stairs. Gaston’s “Animal Armor” traveling exhibit, first displayed right here in Price, was recently hosted by the esteemed Carnegie Museum of Natural History.

The Prehistoric Museum is fortunate to once again be the first to host this brand-new exhibit before it hits the road for a global tour of museums. You won’t want to miss it! “Horns & Tusks” opens to the public on July 2 and runs through the end of the year. Access to special exhibits is included with general admission to the museum. The Prehistoric Museum is open Sunday through Wednesday from 9 a.m. to 5 p.m. and Thursday through Saturday from 9 a.m. to 7 p.m. 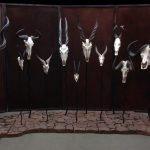 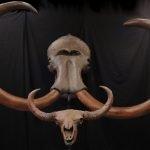