Adoption of the Emery County Emergency Operations Management Plan was the first item of business for the Huntington City Council at its April meeting last week. Each city in Emery County needs an emergency management plan in place. They can write their own or adopt the county’s plan.

The next item was the approval of three new business licenses. A new owner requested a license for Clyde Park Estates. This permit needed to be forwarded to the health department before final approval. TC West Printing, LLC, located at 271 South Main Street and now owned by Kelly Graham, and Kitty’s Henna Garden, located at 163 South Main, were both granted business licenses.

Casey Olsen from the Division of Wildlife Resources then addressed the council regarding the city’s Urban Deer Ordinance. He advised that they need to obtain a Certificate of Registry (COR) and then set up their own parameters to administer this ordinance. Olsen also volunteered to attend a work meeting to help establish a plan for the city.

Following this, a motion was made to open a public hearing for the purpose of a second hearing on the city’s Community Development Block Grant used to purchase equipment for the fire department. No comments were made, so the hearing was closed.

Resolution 5-2022 was then adopted, which will allow the city to clean up the empty lots in the cemetery that were purchased over 60 years ago and have not been used. The resolution requires public posting for three weeks. Anyone claiming the lots needs to provide proof of ownership.

Next, Gloria Wilson, representing the MECCA Bike Club, requested a donation. The request was granted in the amount of $150.

Mayor Leonard Norton then advised the council about House Bill 242, which will require all secondary water connections to be metered by 2030. He also stated that any new connections after May 4 must be metered. The city will likely have to increase its secondary fees, but meters are hard to find as they are back ordered at least six months.

The mayor also spoke about the water usage for 2021 and stressed that it could be even worse this year. There will be no watering on weekends or between the hours of 10 a.m. and 7 p.m. He thanked everyone for the successful Easter egg hunt and expressed appreciation for their hard work.

Department and council members reported that spring duties and responsibilities are being completed. The Blue Sage summer rodeos will be held in Huntington this season beginning in April with another one in May and June. In addition, Heritage Day plans are nearing completion and advertisements are being placed. 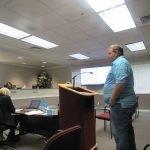 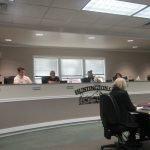