The Huntington City Council opened its meeting last week by approving a new business license for Pop Central owned by Jon and Lacy Faimalo. The business will be located at 365 South Main Street. Next, a proposal for legal counsel from Aaron Lancaster, assistant Emery County Attorney, was also approved. A contract with Riley Construction for sidewalk concrete work in the city was then approved by the council.

A tentative budget presented to the council by Huntington City Treasurer Ronni Torre was next accepted. Gloria Wilson, Youth City Council Advisor then presented the new youth mayor, council members, treasurers and recorders to the council. They were administered the oath of office by Huntington City Treasurer Ronni Torre. Mayor Leonard Norton welcomed the youth council and thanked them for their willingness to serve the city of Huntington. The mayor then requested everyone that is in a position to represent Huntington City to please do so with professionalism.

In the mayor’s report, he stated that the water situation looks bleak and he hopes that everyone will abide by the city’s guidelines. Council members and department heads then gave their reports to the council and audience.

Councilman Tom Kay reported that the Huntington City Fire Department was notified by the Forest Service that they would be on call if needed at one of their controlled burns, stating that they were most qualified with wildfire fighter cards.

Councilwoman Lesa Miller reported the Blue Sage Rodeo series held at the Huntington Arena had 124 entries and the next rodeo is scheduled for Memorial Day weekend. The Heritage Days rodeo queen contest will be on June 2. She also met with Casey Olsen from the Division of Wildlife Resources to finalize the Urban Deer Control program for the city.

Councilman David Emery welcomed the youth council and shared that weed control materials have been ordered for the cemetery and parks. Councilman Judd Beagley said that the chairman of the Mother’s Day festival has requested having vendors in the park on Wednesday evenings during the summer. He has hopes that the flower planters for Main Street will be in place by Memorial Day.

Councilman Jerry Livingston reported having met with crossing guards. He explained that four new hand held signs are needed. He also shared that the conflict at the dumpster has been resolved.

Before adjourning, it was announced that a retirement of flags will be held on Memorial Day morning. 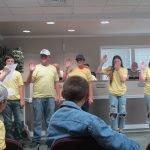 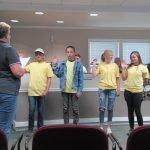 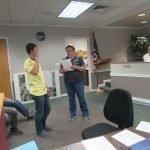