The June title-holder of Employee of the Month for Carbon County was announced as John Rich during the Wednesday evening commission meeting.

The fact that Rich is loved and greatly appreciated was apparent as the commission chambers were filled with nearly all the members of the road department, which is where Rich is currently employed, to show support and gratitude. Rich was nominated by several coworkers, who briefly spoke on his merit at Carbon County Human Resources Director Rose Barnes’ request.

Alex Skaggs and Brian Pierce stated that they saw this as a good opportunity to nominate Rich and ensure that he is given the recognition that he greatly deserves.

“We believe it’s been an overdue, deserving accomplishment,” Skaggs stated.

The duo continued by stating that, between everything personally in Rich’s life, he always makes it a point to be on time and assist everybody. He is also credited as always having a smile on his face as he helps. Skaggs informed all that Rich is one of the most knowledgeable individuals he knows and is willing to help anyone, whether it be with a work issue or a personal issue. It was also made apparent that Rich saves a lot of money for the county by being so well-versed in his career.

Rich accepted the plaque presented to him and thanked all, stating that he appreciates those that nominated him as well as the entire road shop. This was echoed by the commissioners, who briefly touched on all that the road department does for the county and how well the work is conducted. 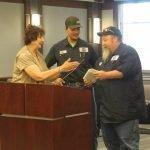 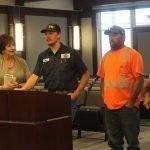 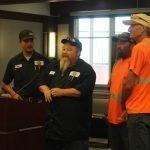