Family members of Lieb Miller gathered at the council chambers on Wednesday to honor their grandfather during the Price City council meeting.

Gary Sonntag, public works director for Price City, took time during the public comment period to announce the honoring Lee Miller, the man who built the first steel water storage tank in Utah. Plaques were given to six family members in place of Lieb. With that, a display will also be placed on the centennial wall of fame in the Price City Council Chambers.

“The power and determination of our founding fathers, much like Lee, needs to be recognized and reinstated. I believe that the Lee family has it in their blood to do so,” said Mayor Piccolo.

Lee Miller built the first steel water tank in Utah in 1938. While he originally had a crew set up to help him with the project, due to the demands of labor disputes, Lee ended up doing the job all on his own; which was an extreme task for just one man. He mechanized different systems to help him with lifting and holding the parts that were needed to build this tank.

The family shared their stories and reminisced on the man who had a strong influence on their lives, and Price City. Lee’s display will soon be placed in the upstairs of the council chamber on the wall of fame.

Below you will find the article on Lieb Miller and his accomplishments from 1938.

0.75 MILLION GALLON WATER TANK FIRST LARGE SCALE CULINARY WATER RESERVOIR IN THE STATE OF UTAH FOREMAN AND CREW OF ONE

‘ONE-MAN GANG’ LIEB MILLER RESTS FROM DUTIES IN CONSTRUCTING, . ALL BY HIMSELF, A 750,000-GALLON STEEL STORAGE RESERVOIR.

the fact is worthy ofnote. However, when a “one-man gang” proceeds to fabricate 90 tons of heavy sheet steel into such a tank, unaided, it brings forth a visit from many a “doubting Thomas.” Such is the experience of Lieb Miller, local blacksmith and machine shop proprietor.

Early in August of 1938 Mr. Miller was low bidder on one of four contracts to improve the local water system. His contract called for the building ofa 750,000-gallon steel storage reservoir just north of the Price high school for the sum of $9885.80.

According to Mr. Miller, he planned to hire the labor on the tank while he devoted his time to his blacksmith shop here and thus provide employment for three men on the project.

When the tank was started, his troubles also started in the form of labor disputes. Rather than submit to demands made upon him, he declared that he would build the tank himself, without aid, and this he has proceeded to do, thus earning him fame as the local “one-man gang.’

The tank, when finished, will be 80 feet in diameter and 25 feet high, and will be made up of steel sheets seven feet wide by 40 feet long, which weigh more than one and one-half tons each, according to George W Cassity, government inspector-engineer for the project.

In spite ofthe handicaps ofworking alone, Mr. Miller has completed 84 per cent ofthe project and is only four per cent behind schedule.

Mr. Miller built his own derrick with which he hoists the cumbersome sheets into position, after which he joins them together with electric welding. The sheets are laid up in bricklaying fashion and are curved to fit the tank as they are put in place.

The complete project includes preparation of the tank site, the laying of 3000 feet of 12 inch water main and building of the tank at a total cost of$21,818, and is being done under a P W A grant of 45 percent of the cost.

The tank will be coated with a rustproof surface on the inside and aluminum paint on the exterior, and is scheduled for completion by December 23, Mr. Cassity said the tank can probably be completed by that time, although Mr. Miller lost considerable time waiting for the excavation work to be done. However, he has been gaining on the schedule since he started the steel work. 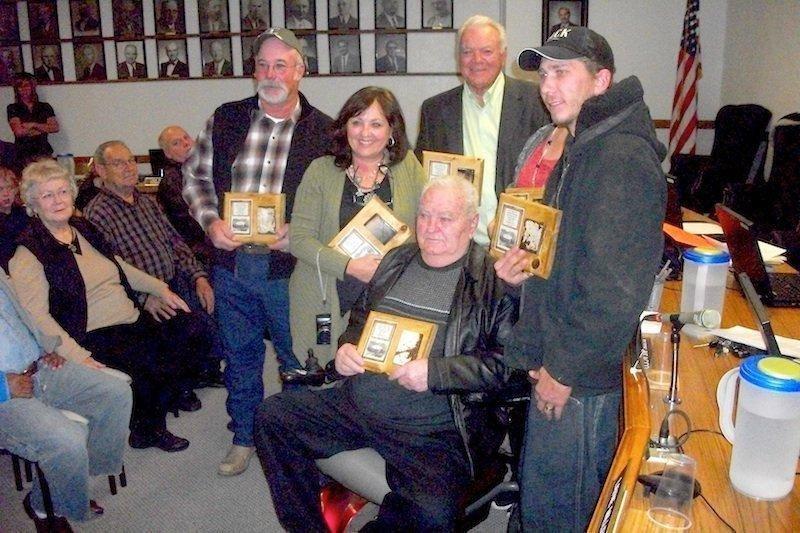