Local clergy of the faith-based community in Carbon County recently met for a faith-based initiative meeting that was hosted at Price Chapel. During this two-hour meeting, members of the community that were in attendance spoke about the vision for Carbon County regarding the issue of local youth and their involvement in harmful habits.

Mayor Joe Piccolo gave the attendees a summary of what had been discussed in prior meetings. He also spoke on the importance of the involvement in the initiative.

“The increase in awareness is very important for what we’ve done,” Mayor Piccolo stated.

He further explained that awareness that is gathered develops thought. From there, thoughts will develop into action, which develops into success. Piccolo stated that he believed there wasn’t a single person in the room who wouldn’t take the steps necessary to prevent the next suicide or harmful situation in our community.

Mayor Piccolo also stated that he was disappointed that more elected officials weren’t present at the meeting and challenged the attendees to encourage more to join and take action.

Richard Wood then spoke to the assembled crowd, telling a number of stories of the importance of being there for your child. Wood stressed that schooling needs to go beyond getting a high school diploma. He stressed that character traits that will help for all of life needs to be focused on and taught, such as self-control and perseverance.

“Connection is the key to prevention,” Wood stated.

Price Chapel pastor Steve Swinburne also took time to speak to attendees. Using bible passages, he explained the importance of helping out and being there for others. Time was then taken at the meeting to allow the different organizations and churches in attendance to inform all of their meetings and groups that are available to the public.

East Carbon is holding a joint prayer on the first Sunday of each month, the focus of the prayer being the youth and the strength that they need to overcome and succeed. Gospel Community Church has a Recovery and Redemption Group on Monday evenings starting at 6:30 p.m. The Wellington LDS stake has a program with Deseret Industries in order to assist locals in finding a job and assisting in learning tools and resources to get back on their feet.

Also available to the community is a Lost and Found Recovery group at Liberty Faith Fellowship at 6:30 p.m. on Friday evenings. This group is also featured at Calvary Faith in East Carbon at the same time. David Alvarez with the community Christian Center stated that, through their thrift store, they are able to assist locals with clothing, food, household items and more.

Many more groups and services are available throughout the community. A document with all of the information program provided at the meeting will be comprised. The next Faith-Based Initiative meeting will take place on February 15 beginning at 11:30 a.m. at the Westwood Church in Price. 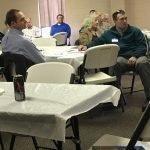 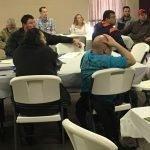