The local J.C. Penney store has been a resident favorite and familiar site on Price’s Main Street for nearly 106 years. The particular Price location was the 12th store that was opened by J.C. Penney back in 1910 and was originally named The Golden Rule.

The closing of the iconic store is not a singular decision. There are a series of seven stores that will be closed throughout Utah, mainly in smaller towns. The news of the store closing hit residents hard. Sadness and disappointment were the general reactions.

The yellow sign outside of the store and certain areas inside of the store are what sets the J.C. Penney location of Price apart from other locations. The preservations of the old decorations, interior and exterior, were kept for the customers to make them feel nostalgic and more at home when shopping in the store.

The store is scheduled to shut its doors in mid-April. As unfortunate as it is to hear the closing of the store, there is hope. A hotline number has been set up that reaches corporate in order to put in a protest that will possibly keep the store open. The more people that call in to protest, the greater the chance of the store staying intact increases. The number to call is (972) 431-8200. 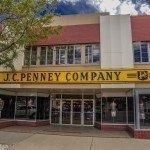