Pictured: Shanny and Nathan Wilson appear before Wellington City Council Wednesday night to report on a raffle the duo used to raise money for victims from recent flooding.

After being affected by historic floods in August of 2014, Carbon County residents Nathan and Shanny Wilson saw many in the town of Wellington affected by all-too-similar flooding in September of this year.

Wanting to help and assist those affected by the floods, the two decided to provide a raffle to help raise money that could be used by others in the efforts of relieving any damage or harm done.

Thus, the duo purchased a gun and hosted a raffle for it with tickets being sold at various business locations.

When all was said and done, $900 was raised for those affected by the floods.

Both were recognized Wednesday night at a previously-scheduled Wellington City Council meeting.

“This is our way of giving back,” said Shanny at the meeting.

The pair, along with Wellington City Mayor Joan Powell, delivered special Christmas envelopes to several of the families after the meeting with money raised from the raffle. 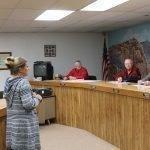