Despite a crash in round 2 that left Price native Robbie Mitchell with broken ribs, the local racer recently managed a second-place finish in the third round of WORCS at Lake Havasu, Ariz.

“The crash at round 2 was worse than I had thought originally,” Mitchell said. “Turns out I broke some ribs so training has been at an all time low. We knew I wasn’t 100% but decided that I was good enough to get half the laps for a finish.”

Medical and training woes didn’t stop Mitchell from jumping out with the holeshot to start the race on a high note.

“I decided that I wanted to lead the first lap if I felt good enough after the first turn,” said Mitchell. “After the first lap, I moved over as Mike Sloan and Beau Barron caught me. I knew I had to be smart and finish healthy to salvage points.”

Mitchell found his pace nearly 25 minutes into the race, which would have been good for third place. However, a turn of events had Barron sidelined with mechanical issues, pushing Mitchell into second to cross the finish line.

“Huge thanks to my family, friends, fans and sponsors for making this all possible,” Mitchell said. 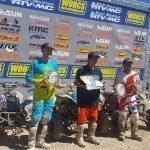 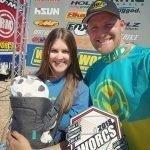 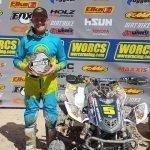