The Mont Harmon Middle School varsity basketball team triumphed against Uintah and Helper this week. At Vernal, the Pirates won a nail-biting game. The final score was a close, 43-41.

The teams were tied at 36 with 4:11 left in the last quarter. Mont Harmon pulled ahead to 42-39 in the next two minutes. Uintah fought back, scoring another bucket. With 20 seconds left, Colin Lewis made a foul shot, propelling the team to victory.

Derek Hillam was a clear leader of the team effort to beat a Uintah, a team that was staffed with much larger and taller players. He earned a triple-double, garnering 25 points, 13 rebounds and 10 steals. Kaleb Nelson, a seventh-grader, and Jon Banasky brought the team eight rebounds each.

After the game, the players gathered around coaches Jered Hardy and Darin Lancaster to give them a round of applause and credit for the win.

At Helper on Tuesday, the Pirates prevailed 71-28. Helper fought to keep the game close early on but lost momentum to the Pirates. Hillam lead the team scoring a weighty 27 points. Banasky gathered 10 and Nelson put eight on the scoreboard. Banasky collected 17 rebounds, Hillam gathered 13 and big man Carson Martinez earned seven. Guard Austin Woodhouse carried his share of the labor with six assists as did Riley Wilson with five.

The Pirates faced Pinnacle Academy Thursday at home. Next week, Mont Harmon will travel to take on San Rafael on Tuesday before Helper comes to Mont Harmon to face off on Thursday, Feb. 5 at 4:30 p.m. 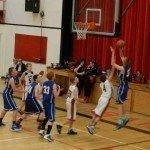 Derek Hillam goes up for a shot at Helper. He continued to score 27 points in the game. Photo courtesy of Tonya Jones. 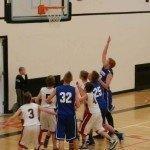 Jon Banasky jumps to sink the ball into the hoop at the Helper game. Photo courtesy of Tonya Jones. 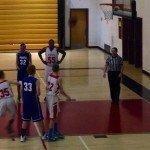