After 38 years of teaching and directing 208 plays at Emery High, drama coach and teacher Neal Peacock said goodbye to a large audience on Monday evening. Although the auditorium was spaced to meet social distancing protocol, the available seating was filled as community members gathered to watch “A Gentleman’s Guide to Love and Murder.”

“One of the best of the best,” was a comment heard over and over following the performance, which capped off Peacock’s long career before his upcoming retirement at the end of the school year. This production was one of 58 musicals Peacock has directed along with 32 contest plays. There have been melodramas, satires, comedies, mysteries, lyricals and any other type that has been written, but every play had a part of “Neal” in it.

Peacock has worked with small casts and large casts, plays with expensive royalties and public domain, building scenery and making costumes or renting them, directing sound and lighting crews, contest plays, impromptu, individual scenes; every facet of coaching drama has been part of Peacock’ s career.

He stated that some highlights have been having his five children in several plays. And while that can be challenging, he feels it was worth it with the growth they gained.

Some of his favorite musicals he has directed are “Les Miserables,” “Into The Woods” and “Man From La Mancha” and he added, “Whatever I am working on at the time.” There have been 56 full-length, non-musical plays. His favorites in that category were “See How They Run” and “The Complete Works of Shakespeare Abridged.”

Peacock will definitely leave a rich legacy at Emery High, especially in the drama department. 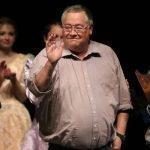 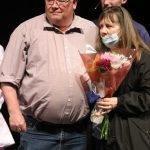 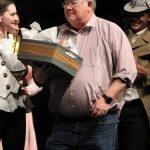