The Southeast Utah Health Department’s COVID-19 report on Wednesday evening included the announcement of six new cases of the virus within the region. This includes five new Carbon County positives as well as one new positive in Grand County.

The local health department also launched an interactive map this week that outlines COVID-19 cases by zip code in Southeast Utah. The map outlines total confirmed cases and active cases as well as hospitalizations and deaths throughout the region. Users can click on the map to highlight different zip codes for information on cases in that area.

Carbon County accounts for more than half of the region’s positive cases with 134 confirmed cases since testing began. Of these, 107 have recovered, leaving 27 active cases. One patient is currently hospitalized due to COVID-19 while four were formerly hospitalized but have since been released. There have been no deaths attributed to the virus in Carbon County.

As part of the total case count, the Southeast Utah Health Department also tracks cases involving students, teachers and staff at local schools as well as the university. Carbon School District has recorded 13 cases of the virus, five of which remain active as eight have recovered. USU Eastern has tallied 10 cases, seven of which remain active as three have recovered.

For case breakdowns, see the graphs below. To view the interactive COVID-19 case map, click here. 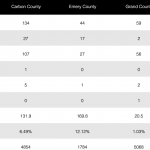 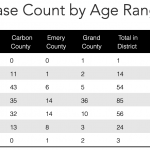 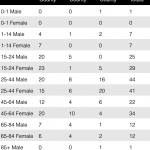 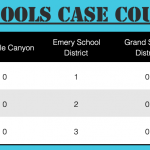