Chad Kroeger, lead singer for the popular band Nickelback, has publicly become the number one fan of Jace Marietti, honorary Carbon County deputy and longtime survivor of surgery and illness.

After a round of surgery for Kroeger, a Nickelback concert Marietti planned on attending was cancelled.

“When I told Jace that the concert had to be cancelled because the lead singer needs surgery on his throat, Jace got really worried about him,” Jace’s mother Valorie explained.

Marietti decided to write Kroeger a note, with the help of his mother, which was shared on social media.

“I was so bummed when you had to cancel your concert, but I know all about needing surgery,” Marietti shared in a photo send to Kroeger. “I’ve had too many to count. I’m having surgery on both eyes on July 9. Wish me luck! I wanted you to know that we said a prayer for you and we are looking forward to seeing Nickelback some time soon.”

“Speechless. Jace, I am in your corner 100% and pulling for you on your surgery,” Kroeger tweeted on the Nickelback Twitter account. “I’m your #1 fan. #Inspiring #Selfless #Heart #TeamJace.” 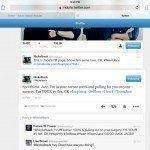 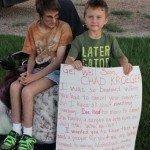