Next, Bureau of Land Management (BLM) Director Chris Conrad acknowledged the beneficial relationship of the Price BLM Office with Emery County. He went on to explain that may of the environmental assessments are nearing completion and will have signatures in the coming days. The Good Water Rim Trail should be signed within two weeks. The Bronco Mine right-of-way EA will be signed this week as will SUFCO and Lila Canyon. Grazing applications have been set back by the furlough but look like they could be 100% because of the moisture in the area this winter. He said that the BLM has no opinion on the Emery County Lands Bill and can have no input. He concluded by stating that that the BLM travel plan has not been completed yet for Wilderness Study Areas.

A representative from the Division of Wildlife Resources then reminded that the big game application for the coming season ends on March 7. Also, those wanting to participate in the shed antler hunt need to take a test online and then print off a certificate.

Daren Olsen of the Forest Service continued the meeting by stating that the canyon gates remain open and will be until it becomes muddy in March or April. He did warn of avalanche danger. The furlough of the national government has set back the completion of the Forest Service’s plan. He also announced timber sales on Black and Reeder canyons. When he was asked who is responsible for reclamation of the timber harvest areas, he said that the companies who make the harvests are responsible and bonded to do so.

Next, Larry Johansen of the State Parks explained the expansion of the Millsite campground and golf course. The hope is to have this new area up and running by June. Eight new power locations are included in the expansion.

Romel Nicholas, formerly from Senator Orrin Hatch’s office, then spoke to the council and audience about his involvement with the Emery Country Public Lands Bill. He stated that the closure vote in the Senate had happened and now debate was suspended. He did warn that there are considerable foes in the House to overcome. He then commended the council for the quality of the bill and advancing the bill this far. 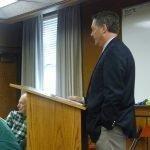 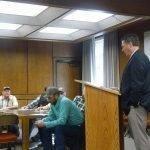