Ray Peterson has worked for the county’s road shop for 19 years and Barnes credited him as being an amazing man. Daniel Campbell of the road shop also spoke about Peterson, stating that he was not sure what it was going to be like for him not to be there anymore. He continued by stating that Peterson has been a great partner and he cannot thank him enough for all that he has done.

Commission Chair Larry Jensen stated that he hates to lose Peterson and will miss him as a valued employee of the county. Those remarks were echoed by commissioners Casey Hopes and Tony Martines, who also stated that they appreciates the efforts of late nights calls, his work during snow storms and more. 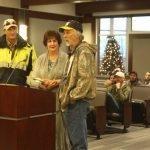 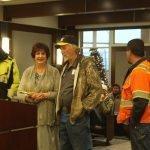