In early August, dispatch received a report on a suicidal individual near Consumers. Deputy Mike Hreinson responded to the call and was able to locate the vehicle of the individual in question. Wise and Johnson, in an ambulance, positioned themselves in a safe area that was in sight of the deputy and he was able to flag them down and get them there, which saved the individual’s life.

“Without the quick thinking of Zack and Christine, we would have had a fatality,” stated Sheriff Wood.

He continued by saying that Deputy Hreinson was very grateful to them for being able to think on their feet and wished to thank them for a job well done. Wise stated that, very often, the public eye does not see what they do behind scenes.

Sheriff Wood also stated that to them, it is just them doing their job, but without the entire team working together, they would not have been able to accomplish what they did. Wise wished to thank the other hands involved as well.

Concluding, Commission Chair Tony Martines said what the ambulance department does on a daily basis is greatly appreciated. 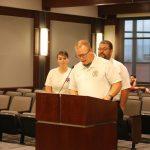 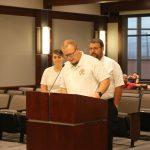 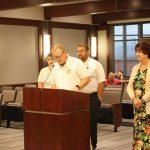