Carbon County Director Rose Barnes announced the November Employee of the Month at the regularly scheduled Wednesday evening commission meeting. This month, the recipient was Shelley Turner with the county attorney’s Office.

Turner was nominated by Carbon County Attorney Christian Bryner, who expressed that it is a stroke of luck to have her working for them. Turner joined the attorney’s office in February of 2015 and patiently learned all of the systems and processes. At the end of 2017, Turner was named the office manager.

“There’s no way to overstate the importance of Shelley to our office,” Bryner stated.

In any given day, Turner speaks with the Carbon County Sheriff’s Office (CCSO), all local police stations, the FBI, the Utah State Prison, the Office of Debt Collection, Four Corners, the county commissioners and more. At each, there are different processes and individuals to speak with in order to complete tasks and Turner knows them all. Last year, approximately 650 district court cases were filed and Turner had to schedule everything that happened in those cases, keep track of deadlines and hearings, and more.

Turner is also at the front of the line when a victim comes to the window, as well as those that call in. Beyond being efficient, Turner is also known as being incredibly smart, never tiring and always giving it her all.

“She gives the county a full day to the minute,” Bryner continued.

He concluded by stating that Turner is the heart, brain and muscles of the office. Attorney Jeremy Humes echoed Bryner’s sentiments, stating that she is always willing to do whatever is needed and is on call 24 hours per day, seven days per week. Turner’s photo will be featured in the lobby of the Carbon County administration building. She was also given a commemorative plaque following the presentation. 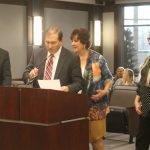 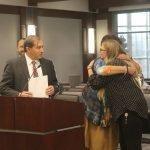