Sutherlands was the headline sponsor for the event. They provided free, ice water and sunscreen for all in attendance in addition to their sponsorship of the event. Big Moe’s provided food.

Entertainment on July 9 will feature Kristy Woodhouse and Sherrie Vlamakis. Those who attend are encouraged to bring a canned food item for the Carbon County Food Bank as part of the event’s food drive. 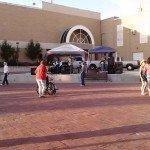