A third fire sparked near Sunnyside Tuesday afternoon, adding to the two fires that are already disrupting the area.

According to Clark Maughan from the Moab Interagency Fire Center, the Sunnyside fire is currently burning approximately 200 acres of brush and grass in an area two miles north of East Carbon. Three fire engine crews, with another on order, as well as two hand crews, a water tender and a bulldozer are working on the fire, which is 35% contained. The cause of the fire is not known at this time.

The Bear Canyon Fire that ignited on Sunday is burning acres of brush and grass. Twelve smoke jumpers and a type one helicopter have the fire 25% contained.

The Cottonwood Ridge Fire is currently being fought by two hotshot crews, eight smoke jumpers and one fire engine. The fire is expected to be contained by July 25.

According to Clark, no structures are threatened by any of the fires.

As of Thursday, the Sunnyside fire became 100% contained after 450 acres burned in the area. One crew and two engines continue mop-up at the fire site. According to UtahFireInfo on Twitter, the blaze was caused by a lightning strike. 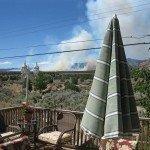