USU Eastern’s Jennifer Leavitt Student Center played host to a unique kind of art display on Wednesday. Rather than paintings or sketches framed and hung in symmetrical patterns, the display featured 80-100 shirts of varying colors and designs to help raise awareness and promote healing for women victimized by domestic violence.

The Clothesline Project, started in Massachusetts in 1990 with a total of 31 shirts, has since grown and now includes displays across the nation. The project’s aim includes helping those who have survived or lost a loved one to domestic violence in their healing, to educate about domestic violence and to allow survivors a safe place to let their voice be heard about the subject.

Each shirt is dedicated to an individual woman and is created by the woman herself or by a friend. Gray shirts symbolized verbal and/or emotional abuse, survivors of domestic violence were symbolized by yellow shirts, red and pink shirts were used to represent survivors of rape, incest survivors were personified in blue shirts, violence based on sexual orientation was shown forth in purple shirts, black shirts were used to represent violence because of a disability and white shirts were displayed in honor of those who have died because of violence.

Those who are victims of domestic violence are encouraged to call the National Domestic Violence Hotline 24/7 at 1-800-799-7233. 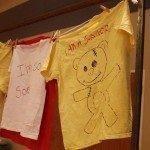 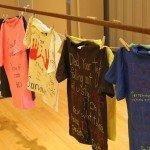 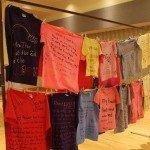 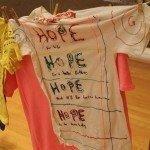 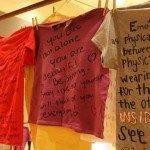 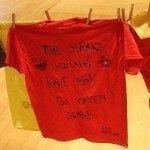 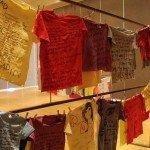 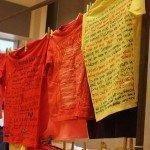